Listening and talking
Talking and Listening
These are the staples of sales.

This week a sales rep from a world class corporation sent me an email requesting that I attend a brief webinar. After reviewing his email,  I specifically asked him to give me his elevator pitch. It became clear that he was selling a service that is not appropriate for my company. I was firm in responding that my company does not do that kind of marketing, it’s bad for our branding. To be certain I asked “Is that what you’re selling?” He then responded “It’s more-so about helping you make more money without putting stress on your resources and without disengaging your customers”.

OK, so maybe I’m wrong and he has something that could have value. So I dug deeper into his email and asked again in  another way. Eventually he came clean and said he  was selling that service  I don’t want,  just as suspected. The rep was not honest with me and I told him as much in my email response. I shared I expect more from a company with their reputation. I told him if he did this on his own, shame on him. If his sales manager is telling him to lie and be evasive, I asked him to please share the email with him so they can know their tactics are dishonest. Being the strident coach, I recommended they rethink their efforts.

The Master Seller is an expert in finding “qualified” prospects and serving them. Of asking questions and finding out if we can help. When prospects are crystal clear about their desires, and our solution does NOT match up, we thank them for their time and move on to the next lead. We don’t try tricks and traps to get them to sit through a dog and pony show.

If sellers hope to become successful in sales, it’s best they learn ethical sales now, sooner the better. These were the thoughts I shared with the sale rep. He did not acknowledge my comments but merely responded “thank you for your time”.

Some people do not want to learn.

When the Master sells, prospects are hardly aware of it,
To them it’s just a conversation about their lives.

Next best is a seller who is loved.
Next, one who is feared as sleazy.
The worst is one who is considered a huckster.

If you don’t trust the customer, you make them untrustworthy.

The Master Seller doesn’t talk, he acts.
When the sale is closed the people say, “We chose wisely”

Interested
But not interrogating
Patient
Yet not wasting their time
Focused
Yet listening to what’s not being said
Optimizing
To discover a match
Respectful
Cutting to the quick.

As conceptual selling becomes more accepted, when cold calling, sales professionals commonly start by saying: “I’d like to learn a little bit about you and your business”.  Although this is a step in the right direction, as a prospect it at times feels like an  interrogation. Open ended questions about “my business”, that could have been easily found on the website, seem disingenuous. What the seller’s looking for is an opening to uncover some issue that they can help. It’s best to be straight with the buyer, saying exactly who you are, what you do and how you help clients. Then asking the prospect “is this an issue you’re struggling with too?”  to see if they fit in that category. This optimizes the entire process and treats the buyer’s time with respect.

Respect your prospects time, remain patient yet get to the qualification question quickly, practice before calling, cut to the quick.

I was in the area.
Thought I would stop by.
Here is some information, you may find of value.
Would you like to learn more?

Not pushing, not bullying,
not rushing the moment.
A genuine desire to help and befriend
Opens doors to opportunities.

The Master Seller listens first
to understand
Before being understood.
By asking,
They receive
Creating opportunities.

Hello,
I’m PAT from MACHINE COMPANY and  I’m calling about the business climate in ANYWHERE USA this MONTH. From what we hear business is improving are you finding that true at XYZ SPROCKETS?

No matter what they say, you say …

Yes  I hear that from others too.
Do you think this is going to continue or get better, get worse?

Are you folks doing any new projects that require MACHINING solutions?

Who would I talk to about that?

What advice do you have for me? How best can I get in contact  Mr. Snead?

The trick is to get them to talk. Recall the Master Seller is genuinely interested in Understanding Troubles

Both bartender and psychologist
The Master Seller listens.

Many people can work hard and become exceedingly skilled in a profession. But very few have the bravery to  find clients, earn their business and keep them for recurring services. Prospecting is the fundamental skill necessary for finding new clients.  It requires a list, a telephone, tenacity, a playful attitude and the ability to let rejection  roll off you. Lets’s first address what is huge in most people’s minds, the fear of cold calling.    Friend or stranger, all are just people, two sides of the same coin.  It depends on the industry, but people for the most part are great. The Master Seller sees everybody as their cousin.  Yes there is rejection, but it’s nothing personal.

The trick to a successful cold call is to get the prospects to talk. First stand up. This adds volume to your voice and better emulates meeting someone in person.  Dial the phone  from a list of leads.    Call your lead and someone will answer. It may be your target, or a receptionist. Who ever  answers, treat them like they’re the CEO. You’re opening statement should contain:

And do this in one VERY short sentence. Again, one  very short, easy to say, quickly rolls off your tongue sentence. So easy to say you can memorize it. The goal is to listen.

What would you say in your opening statement?   Would you like an example tomorrow? 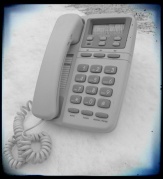 The journey of a closed deal
Begins with a single cold call.

While some fear it
Others  embrace
Knowing that while those  who can manage others is powerful
Those  who manage their fears is mightier still.

The Master Seller anticipates the difficult sale
By managing the cold call.

By separating the wheat
From the chaff
They use  a numbers game
To create opportunities.

Brief in words
Yet long in substance
Tuned for the ear of the listener
The Master Seller makes their pitch.

Both concise and precise
Asking questions that elicit response
in search of a gap
to be filled.

They Listen and Listen.

Will Rogers, the famous Cowboy humorist  from Oologah Oklahoma once said that strangers are just friends he had not yet met.  This is the view of the Master Seller. The  last post spoke about how we should see strangers as ourselves and not be intimidated or shy in their company.  The hardest part of cold calling is getting over this fear of having the door slammed in your face. And indeed that may happen.  But trust that most folks will treat you well.  And the few times this happens is an opportunity to laugh at how silly people  can be.

The Master  Seller knows that with rejection comes opportunity.  Being awake to this reality, brings a smile and acceptance.

See strangers as yourself.
Trust they will treat you as you would be treated.
Knock on the door
Pick up the phone
Seek rejection, and leads that come as consequence.

The Master Seller revels in meeting strangers,
The opportunities it may bring.

Learn more about the Podcast Agency and Pat Helmers

What is the Tao Te Ching of Sales?