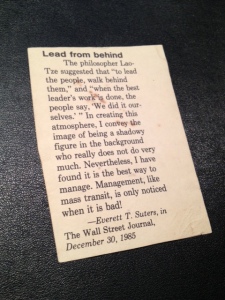 This week I came across one of my first exposures to the Tao, a clipping from the Wall Street Journal. At the time I was a lead software engineer for cellular networking features at Lucent Technologies. My team consisted of a half-dozen engineers of multiple age, experience, and ethnicities. It was a new challenge, and a challenge it was.

The clipping had a quote from Lao Tze that said “to lead the people, walk behind them,” and “when the best leader’s work is done, the people say, ‘We did it ourselves'”. Previous to this project I commonly micro managed and ordered the team to do this and that, in a manner I thought managers should act. From that behavior came strife, troubles and fear. I wanted to do something different on this new project and I embraced this notion of “walking behind.”

One of the team members, Serge, came up to me 6 months wondered why I was not “on his case” everyday and why he let some team member struggle and not just order them to do it my way. I showed him the clip and he smiled. From then on he understood this management approach. All of the code written on that project looked like I had personally coded it. It had my style and beliefs in both comments and design. But each member thought they had “did it”. They took great pride and responsibility for their part. In the end the project was a success and deployed to a large Toll Switch (long distance) in London England called Mondial. It was on this project I was awarded two Patents.

Lao Tze’s teachings about management can be well applied to the management of sales accounts. A Master Seller leads from behind, delving deep into the needs of the prospect, discovering their pain, crafting a solution that might work, coaching the prospect into being a buyer, and soon customer. This leading from behind is true leadership. And when done skillfully, the buyer hardly notices it.

Learn more about the Podcast Agency and Pat Helmers

What is the Tao Te Ching of Sales?